Travel writer and photographer, Steve Newman, travelled with us on The Original Nile by Royal Steamer in September 2022.

Travel writer and photographer, Steve Newman, travelled with us on The Original Nile by Royal Steamer in September 2022. 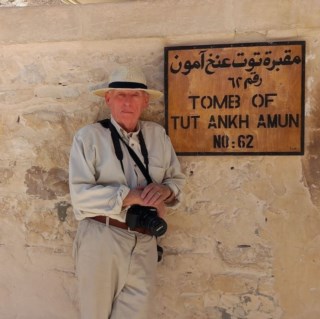 Visiting Egypt has always been the dream of so many of us and combining a land tour with a cruise along the Nile from Luxor to Aswan is becoming an ever more popular way to explore this fascinating country.

Indeed, Jules Verne has several tours and cruises with extension options that really let you peel back the layers of time and everyday life. One of these is a two-week river cruise from Cairo to Aswan which visits parts of the country where tourists are rarely seen, the welcome is incredibly warm, and you literally travel in Royal style.

Unlike other modern-day Nile cruise ships the SS Misr holds only 46 passengers and as the former Royal Barge of King Farouk I, it carries you along in the style and opulence of the privileged elite of the early twentieth century.

We were transported to all the major sites in a large, air-conditioned coach, with cold bottles of water when we needed them, with our group split into two smaller groups each with our own outstandingly, dedicated guide. A coach designed for seventy with only twenty people on it is indeed a luxury!

Magnificent as they are, however, this cruise is about much more than the monuments and tombs of ancient Egypt. It’s also about exploring the magnificent Islamic Mosques of Cairo with their amazing ceramic and interior design, Coptic Churches hidden inside the remains of Roman garrisons with their dazzling icons and beautifully simple yet equally stunningly beautiful interiors.

It’s about walking along promenades beside the Nile at night to watch the local children playing in the coloured fountains as their parents chat to you and welcome you to their country. Having a late afternoon tea on the terrace overlooking the islands of the First Cataract of the Nile as the sun goes down and bathes the sails of the fellucas a rosy orange as it has done for thousands of years.

I was impressed by the way the early morning starts took us to the sites to avoid the crowds and the intensity of the midnight sun. Not for us the long queue of following a guide holding up an umbrella, instead meticulously planned detailed short walks where, as with the ship, the service was exemplary, and nothing was ever a problem.

The highlights of this cruise are the Temples of Abydos and Dendera, sites not as well visited by tourists, indeed not that well known, where the pillars and vivid colours have to be seen to be believed.

Dendera is one of the best-preserved temple complexes in Egypt with the main temple having a magnificent chamber featuring 18 huge columns covered with stunning paintings and carvings.

The temple has many passages and chambers hidden within its walls. The best known is the subterranean crypt which is open to visitors and accessed through the floor of a small room at the rear of the Temple. Beware though as access to it is a via short, steep staircase and the tiny entrance is not for the fainthearted or claustrophobic.

We visited all the major sites, temples and tombs from The Pyramids and the Sphinx to the temples of Karnak and Luxor to the Valley of the Kings with the added delight of evening cocktails in colonial hotels and former royal places, strolling in the floodlit gardens and seeing ancient temples bathed in golden evening sunlight.

Do buy a ticket to visit those tombs in The Valley that are not generally open to the public. The latter are fascinating in their own right, but The Tombs of Rameses VI and Seti I are simply breathtaking with the colours and designs of their staggeringly well-preserved walls and ceilings.

As opulent as she is, the SS Misr is not the only boat Jules Verne arrange for you on this holiday. We found ourselves on a private motor launch for each group sailing on Lake Nasser to visit temples on islands where we were the only people exploring them.

The next day found us cruising the shallow waters and intricate labyrinth between the islets and rocks for the First Cataract to afternoon tea at a Nubian village, again returning to the ship as the sun set on the waters of the Nile.

What makes this holiday so unique however, is the cruising down the river from Cairo to Luxor visiting temples and sites that were free of the huge numbers further south. Egypt is only just opening up after the pandemic, so there are very few cruise boats and the welcome from the children who line the banks or sometimes swim out to greet us, waving and shouting their hellos, is truly heart-warming.

The multi-coloured birds, the farmers who lead their water buffaloes down to drink by holding the reins in their mouth and the fishermen using techniques unchanged in thousands of years make this so much more than a holiday and turn it into a lifetime’s experience you will simply never forget.